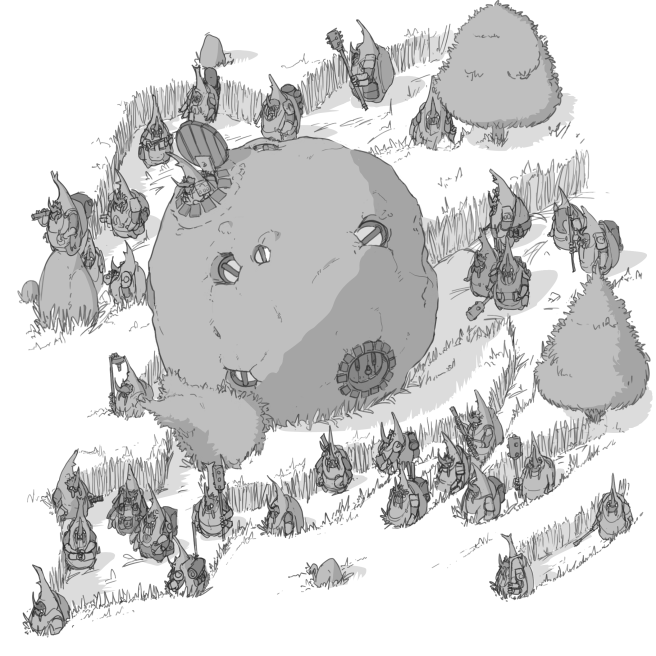 This is effectively a lore-dump on who entoma are and how to characterize beetlefolk like these. Beetles are not exactly represented in fantasy. Referring back to previous blog posts, they’ve no memetic weight, and thus the responsibility falls to a given designer to fully flesh them out. Below is my attempt to do so.

To be an entoma is to struggle with the theme of identity. A single above-ground colony of Entoma numbers anywhere from a hundred thousand to a million individuals, all of their subconscious minds linked telepathically to the same hivedream. The entoma are known across the world as swarms of voracious foragers with towering mud hives that stretch like giant graveyards for miles, each one carefully sculpted to suit the swarms within.

If their numbers aboveground weren’t great enough, there are colonies of up to forty million individuals in hives on the Nethersea, feeding off of roaches, fungal matter, bat guano, and cave coral. Needless to say, the individual’s personality is largely tailored to the needs of the swarm, and there exist almost no Entoma that are purely shaped by their own desires.

Occasionally an entoma is born who does not hear the whispers of the hivedream. As entoma larvae are so numerous and so small, adults use telepathy to locate them, so such larvae are simply not fed and starve to death. You may imagine that somewhere within the world, by the laws of probability, there exists a larvae that was both disconnected from the hive and yet was also was noticed and fed. This hypothetical individual may have even managed to grow to adulthood and snuck away to live a life unbound to the hive, but would be something of a miracle.

Entoma are primarily vegetarians and opportunistic insectivores. Their survival in the Nethersea is rooted in conserving resources, so despite their large numbers, they are remarkably famine-free. It is not uncommon for members of a community to shut down and go into year-long periods of hibernation in response to a subtle prod from the hivedream. In order to maintain good collective health and vigor, the hivedream also self-edits, erasing traumatic or unpleasant experiences from the collective subconscious as the collective deems necessary. As a result of this, entoma are characterized by most of the Dawn State as being a very cheerful race. Never mind where these unpleasant memories go – typically they are shunted off into select outcast drones who go mad from the burden of it all and go off to die.

Entoma who interact with outsiders are psionically groomed to have a different set of behaviors and mannerisms, pulled from the hivedream to best appease the non-arthropoid races of the world. This social grooming is also given to representatives who seek work in human, dwarven, or saurian cities, to ensure that they fit in. A sense of personal space must be developed – in the hives, Entoma clamber all over each other in the tightest traffic management the Dawn State has ever seen. An appreciation for the day-night cycle must be developed – in the hives, Entoma scurry until they are tired, then enter a restful state, and move again once they are rested. A new set of physical gestures must be developed – in the hives, Entoma communicate simultaneously with pheromones, with their rhythmic beating of their legs on the earth, and through a form of weak telepathy in the hivedream. When they are conversing with outsiders, entoma are robbed of their accustomed three avenues of communication. They often struggle when using words alone to fully convey their thoughts.

Physically, Entoma come in all shapes and sizes –in each hive there are many differently shaped arthropoids that are all considered part of the greater hive. As outsiders seem to find the chubbier, beetle-like Entoma most palatable, those are the Entoma that are most visible within the Dawn State, outside of the hives. However, super-majors exist, dumbed-down brutes that tower over their peers, and specialized Entoma exist for particular tasks, such as living food stores or fungus-resistant shroom farmers. 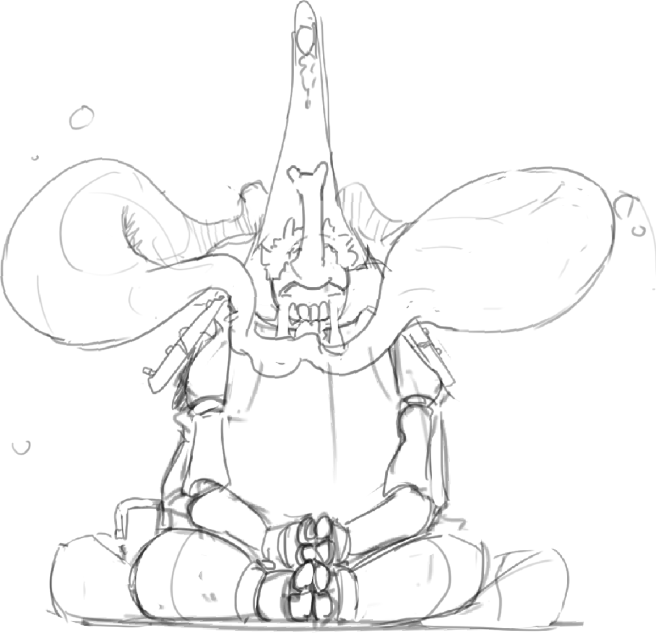 The simplest way to understand the hivedream is to think of all entoma as being connected to their queen, with the majority bearing little self-consciousness or independent will from the queen’s will. However, pilgrims are a special caste within entoma society, specialized drones who are fed a high-nutrition diet as larvae and who are groomed psychically by the queen or other pilgrims to become independent from the hivedream at a young age. They are able to act as free agents, though they remain in communion with the queen through meditation, and can form small groupminds by integrating drones into their own personalized psychic web.

For this reason, an entoma pilgrim usually consists of several bodies which have a collective singular consciousness. A pilgrim may say “I am Jomunid” to talk about his three-bodied self, for example. Their soul is continuous, their mind is continuous, across all these bodies. The name structure is typically one syllable per “body-self”. So if the three-bodied Jomunid encounters a gorgon and the “mu” body is turned to stone, the pilgrim becomes a much less intelligent (but still functional) “Jonid” instead.

Though theologists argue about this, it can be supposed that since a pilgrim’s bodies all act as surrogate pilgrims once they’ve been incorporated, a pilgrim is immortal. As long as the pilgrim can keep nabbing completely braindead drones into their groupmind, the pilgrim can maintain their own identity even as their bodies die, one by one, every 20-30 years.

Unfortunately, the availability of drones isn’t trivial. Drones may not have much in the way of independent will, but this is not to say that they are empty husks; whenever a pilgrim integrates a new drone, they change themselves a bit as new quirks work their way into their identity.

Furthermore, there is the risk of splintering an identity under stressful situations – when individual hormonal “fight-or-flight” responses arise in each physical body, the psionic connection can break, causing a pilgrim to lose control of their groupmind and become fragmented selves who have to do immense emotional and psionic work to re-integrate. This reincorporation can often result in a slightly changed personality, as different selves may re-integrate with differing priorities and hierarchies of thought compared to the original.

In this way, we might argue that pilgrims regularly “die” and become “new selves” if we adapt certain ontological views of the soul which don’t mesh with how they work. Their personalities and core beliefs change as they nab new bodies.

It’s been postulated that pilgrims would have lower risk of splintering if they could maintain more bodies (as the Queens do with the entire hive), but the psionic abilities of pilgrims are sadly nowhere close to this potent. Rumors exist that they are handicapped this way on purpose so as to prevent them from ever revolting against their queens, but those that perpetuate such sayings tend to disappear in short order.

Which brings us to mating…a most dire subject, and one that most other races find vulgar when considering the sexual nature of entoma.

Most pilgrims want to maintain a stable identity-personality continuity. As such, most pilgrims mate with itself/themselves and then use the healthiest larvae as new bodies for their groupmind. Due to their “blank slate” state, larvae entering a groupmind causes no meaningful personality shift. In addition, mating with themselves eliminates the risk of splintering. If two different pilgrims mate, the hormone-driven excitement of mating can have the same impact as stress, causing their groupminds to mix, sometimes subsuming one pilgrim’s identity entirely into the other’s, but mostly just causing them to swap a few members unintentionally, thus changing both of them irreversibly.

Two pilgrims deciding to mate is akin to voluntarily tearing one’s own soul to shreds.

Of course, pilgrims still do this. Sometimes it’s because the inbreeding is killing them – their lifespans go from 30 years to 20 to 10 as they continue to mate with themselves. Better to maintain some of your personality by mating with another pilgrim than to lose all of it because your bodies are all so inbred that they can’t function.

2 thoughts on “Game Progress Update 2: What are the Entoma?”

Support me!
Buy my games on itch.io!

Buy Me a Coffee!